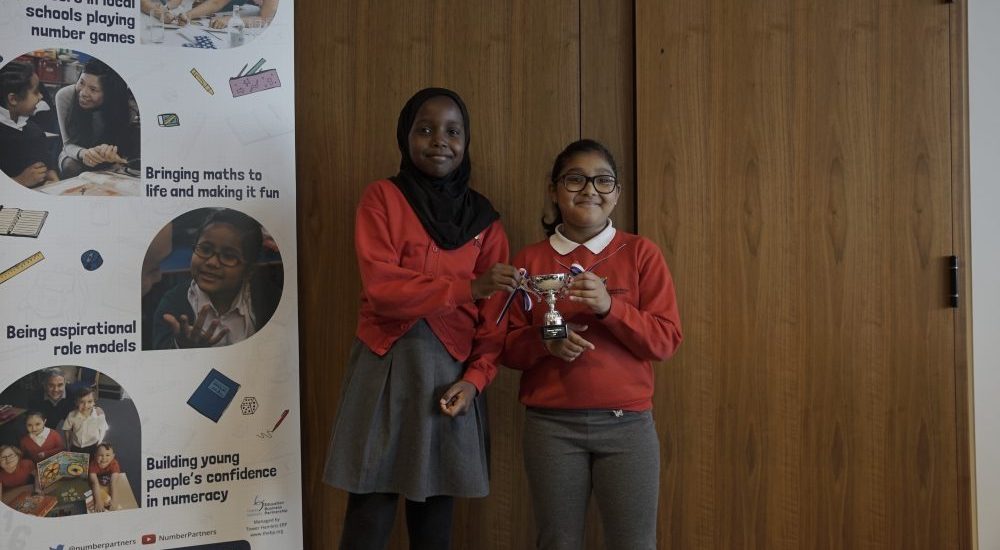 Teams of finalists waited with bated breath as the winners of the Numeracy Challenge 2018 were announced at the end of the Grand Final.

After competing in a two-hour-long maths challenge live at the final, the self-named ‘The Mathsketeers’ team from Thomas Buxton Primary School were announced as the winners, followed by runners up ‘Maths Brains’ from Stewart Headlam Primary.

The final was hosted by insurance company Markel International on Friday at their offices in the famous Walkie Talkie building in the heart of the City.

Out of 36 participating teams from 14 Tower Hamlets schools that entered the competition in March, eight teams were invited to the final.

All the finalists will be rewarded with a trip to Brighton to visit the University of Sussex in June to find out what it’s like to be a student at a top university outside of London and how maths is applied across all disciplines.

A Year 5 from the winning team described the final as the “best day ever”. She enjoyed “working as a team and competing against other people”.

Andrew Green, head of Catastrophe Management at Markel, coached the winning team in his voluntary role as a Number Partner at Thomas Buxton Primary School. He said “They challenge us more than we challenge them so it’s really good fun.”

A Year 6 member of the ‘Maths Brains’ team reflected on the final round: “Some problems were hard and some were easy. There were a mixed variety of problems and you had to use logic.”

Michael McCarthy, the school’s maths coordinator, added: It brings out different skills. Some children would be better at the numerical aspect and some are better at the explanations. They draw on each other’s skills to get the best solution to the problem.”

The Numeracy Challenge is part of our Number Partners programme. The scheme pairs volunteers from the business community with 7-11 year old pupils for half an hour per week to play fun maths games, whilst simultaneously bringing young people into contact with role models from the world of work.

Number Partners gives children individualised support to help children achieve their potential and have the confidence to say ‘I love maths!’

David Sawyer, Managing Director at Markel, said: “It’s good to give something back to the local community. It’s good to get the children’s enthusiasm [for] maths. There’s nothing better than working with children, seeing them smiling and getting them learning”.

If an employer ever needed a better reason to take on work experience, then surely this excellently written blog entry written by Year 10 Bow School student Sumaya Rahman is it. Sumaya spent a week at Half Moon Theatre in Limehouse last week and clearly had an amazing time! Read all about her experiences to […]

Our fantastic intern, Madison Mansour, spent seven weeks supporting THEBP as part of an exchange programme with the University of Wisconsin-Madison. In this short blog, Madison reflects on her experiences, what she learned along the way, and why she wants to continue working in education. Thanks for all your hard work, Madison! “In March of […]